There are about half-a-thousand brands of pre-workout supplements available in the global market today. It is a proof of the growing demand for energy-boosting compounds nowadays from both the throng of serious bodybuilders and the growing ranks of fitness enthusiasts.

It is perhaps, more and more modern gym-goers want to optimize their desired results in each workout session, or simply needing a good energy boost to stick to their respective training schedules after a hectic and strenuous workday. And more often than not, it’s both.

One problem with pre-workout stimulants is that around 9 out of 10 available kinds in the market contain high doses of caffeine.

Since a high percentage of gym-goers preferred, or simply have no choice but to train after office hours or practically close to bedtime, there is a good possibility that those products’ rousing effect may hinder a good night’s sleep.

And we all know that the recovery phase is as important as the workout itself in growing muscles and burning fat cells. The good news is that the tenth part that remains are caffeine-free, and more than 10% of them are truly worth buying.

Besides the obvious reason cited above, a sudden high dose of caffeine could induce gluconeogenesis (GNG), or the metabolic process wherein non-carbohydrate carbon substrates are turned into glucose.

Among the said substrates in humans are glucogenic amino acids such as alanine, glutamine, arginine and more.

In the process, these substrates, which are potential cell volumizers and protein synthesizers for your muscles are converted to energy fuel instead. It’s practically like using timbers meant for building as firewood.

Yes, you were able to utilize it, but the thought that it could have been used for a better purpose is there.

You may interject that the very purpose of a pre-workout supplement is to get you all fired for intense physical training, so why shun a powerful stimulant like caffeine? That is where suitable substitutes come in.

Ingredients that can give you a surge of energy and stamina and help you zone in on your workout, while at the same time promote muscle growth, fat reduction, and other healthful benefits.

What Key Ingredients Should I Look for in a Caffeine-Free Pre-Workout Supplement?

In a nutshell: natural nutrients and amino acids. If you want to get stronger with more lean muscle mass, then you need the right building blocks. A good caffeine-free pre-workout supplement should contain the following essential nutrients and amino acids that are not only great stimulants but will also help you attain and maintain the ideal physique that you dream of:

Its most key function is increasing the production of nitric oxide (NO) in your body and dilating the NO pathways or blood vessels, thus intensifying the flow of blood and oxygen in your skeletal muscles and other vital makeups such as cardiovascular, digestive, neurological, reproductive, and respiratory systems.

Among the immediate benefits of this process is enlarging your muscle pumps, thus optimizing your workout result. It likewise helps prevent and/or remedy erectile dysfunction (ED).

Citrulline also acts as a vital intermediate in the urea cycle, or the process wherein ammonia and nitrogenous toxins are flushed out of our system.

Among its constructive outcomes are enhancing our athletic performance (both in strength training and aerobic department), minimizing fatigue and soreness, and reducing post-workout recovery time. It is also known to prevent or slow down dementia.

Not only that creatine helps increase muscularity and strength, it was learned that continuous intake of this substance also has a positive cumulative effect in bodybuilding.

It is not highly applicable though for endurance-centric sports such as running, basketball and swimming, and must be taken with other supplements in doing aerobic exercises.

It primarily acts as fuel for skeletal muscles’ function and accounts for 35% of the essential amino acids in muscle proteins. It has been observed that bodybuilders who took BCAA supplements gained greater muscle strength in tackling weights and resistance training sessions.

They also gained significant lean muscle mass and lose fat at a faster rate than before taking the supplements.

Why not a carnosine supplement then? Because when you directly ingest clinically formed carnosine compounds, your digestive system will just break it down and flushes it out of your system rather than going directly to your muscles.

Taking beta-alanine supplements, on the other hand, was proven to increase carnosine concentration in muscle fibers, thus resulting in improved athletic performance and fatigue reduction.

To assist you in making an informed choice, we listed five of the currently most popular caffeine-free pre-workout supplements in the market.

We scrutinized them using the presence and amount of each of the recommended caffeine substitutes listed above in their respective formulations:

Consistently garnering rave reviews from regular users and various product assessors, STIM-FREE is definitely on top of its game.

Rightly so, it was clinically formulated to contain a hefty amount of each of the right stuff mentioned above, along with at least 7 other active ingredients.

One of which is betaine anhydrous, a complex vitamin derived from choline-rich food such as spinach, beets, seafood, and cereal grains that support liver health. It is highly recommended for both men and women who engage in high-intensity workout sessions.

Each serving contains (26g/scoop) approx. 6g of L-Citrulline, 3g of creatine HCL, 6g of BCAA in 2:1:1 ratio and 4g of Beta-Alanine. These doses are actually twice as much than found in most of its competitors’ formulas. 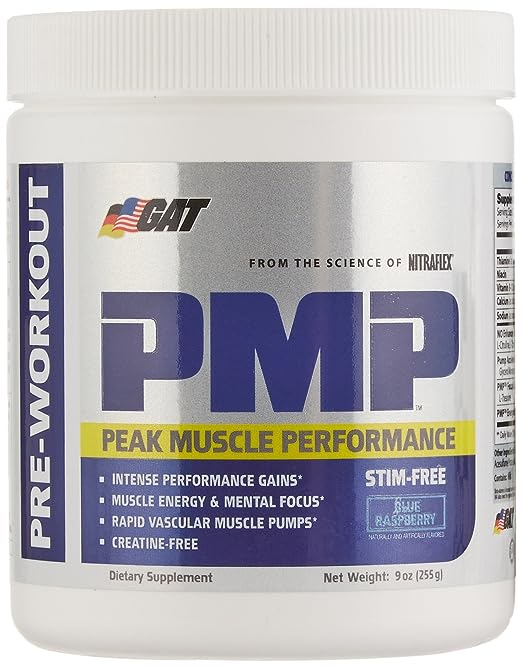 This product is actually been getting mixed reviews among male bodybuilders, but a hit with the women. It is probably due to its pleasant flavor and well-rounded formulation that apparently works well for those who are trying to get leaner and slimmer.

But somehow, it falls short of the expectations of serious bodybuilders, especially those who are yet to be weaned away from caffeine or stimulant-laden supplements.

Its performance enhancing makeup is listed as proprietary blends instead of individual ingredients, namely NO Enhancers, Pump Accelerators, PMP Focus & Cognition Modulators and PMP Energetics. It also contains some of the mainstays in most multivitamin formulations such as Thiamine, Niacin, B-12, and Calcium. 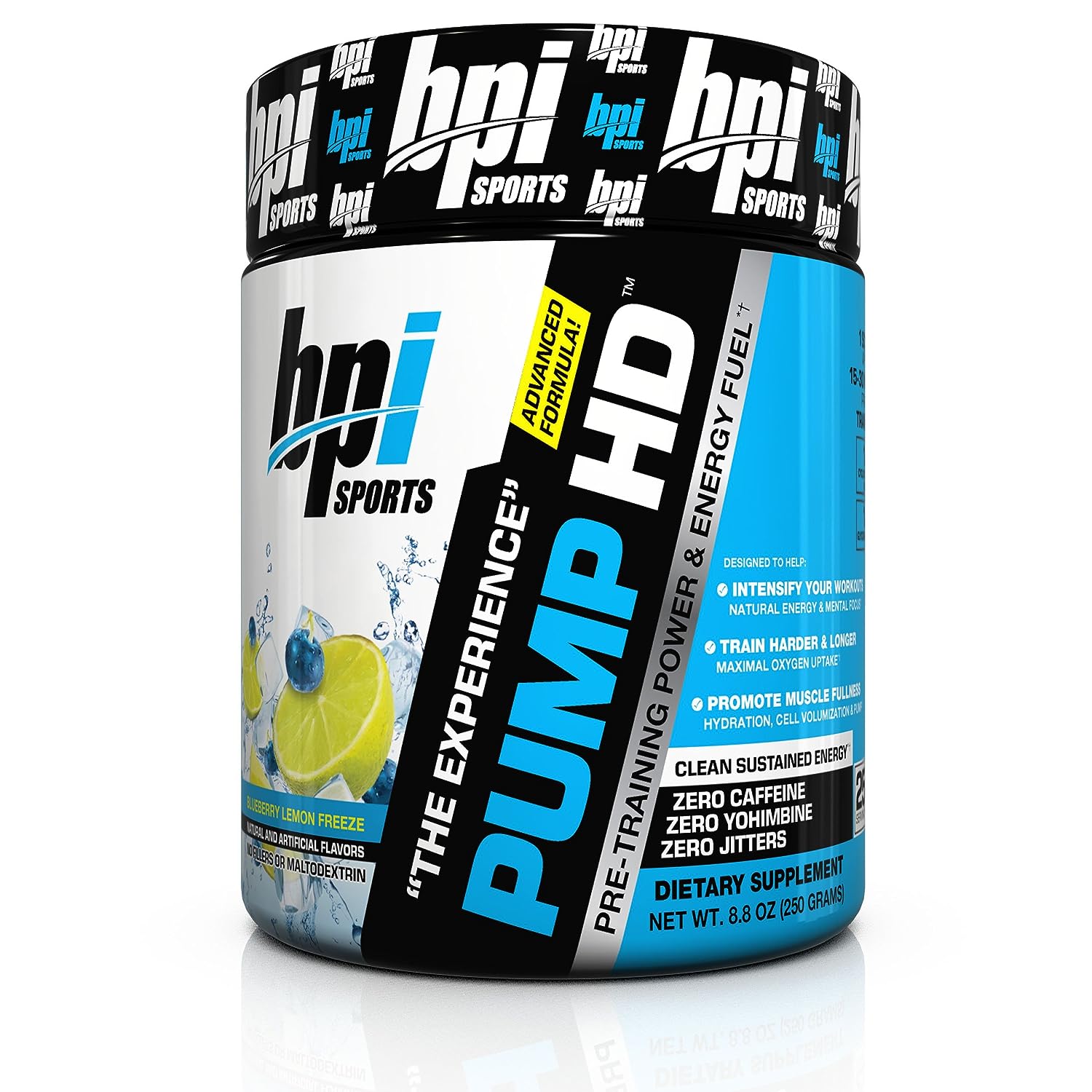 This is one product that really lives up to its name. Various testers noticed the palpable vasodilation effect of this pre-workout supplement, making it highly effective in isolation exercises.

Whether you are focusing on your back, chest, legs, biceps, triceps, shoulders or abs, Pump HD seems to have the uncanny ability to zero-in on your targeted muscle group. Some even attest that you could almost feel the thickening of every fiber of the muscles you are training after each set. It really sets you on course in achieving high-definition muscles in each pump. 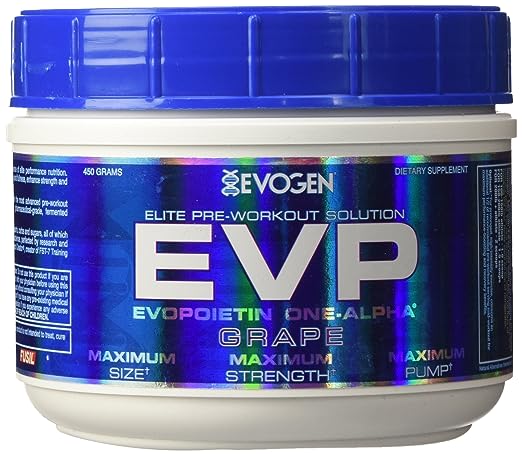 Not only that it was one of the first clinically formulated caffeine-free pre-workout supplements, Evogen EVP is one of the best-engineered and well-rounded product in its class. It was designed to both prime your muscle pumps for weights and resistance training, and to aid your body in post-workout recovery.

It contains all the four recommended caffeine substitutes discussed above in one proprietary blend, along with other active ingredients to help stretch physical endurance and promotes muscle growth and overall health. 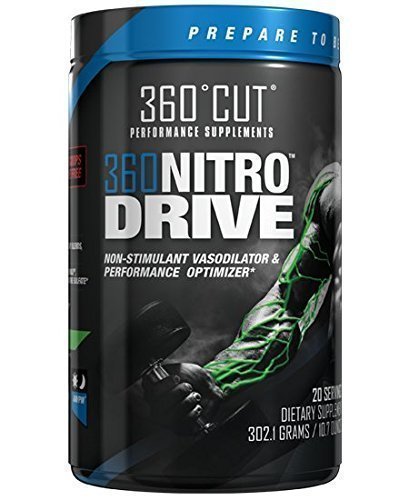 This product is definitely one of the all-star players in the field. Not only that is packing with robust amounts of citrulline malate, creatine HCL, and beta-alanine, it also contains hefty servings of glycerol, which helps deter dehydration and improve overall athletic performance.

Consistently faring well in reviews issued by reputable product testers and independent users, NitroDrive is widely considered as one of the top pre-workout supplements in the market. It doesn’t disappoint any ardent bodybuilder’s expectations in terms of getting persistent energy surge and muscle building proficiency.

It is undeniable that each of the caffeine-free PWO supplements that we discussed here is effective in its own right and has its own merits and hitches. Picking the right one depends on your own fitness goals. Whether you want to get leaner or bulkier, agiler or more imposing, there is definitely one that will work well for you among the products listed here.

Based on its benefits, however, 360 Nitro-drive would be your best bet, especially if you’re just starting out. It has very little negative effects on your body if taken properly, and it produces great results without having to rely on caffeine. The best part is it tastes great!

If this list has helped your workouts in any way at all, feel free to leave a comment. We’d love to hear your opinion on other caffeine-free workout supplements that have worked for you.

If this list has helped your workouts in any way at all, feel free to leave a comment. We’d love to hear your opinion on other caffeine-free workout supplements that have worked for you.